I have to admit, I have more than one guilty pleasure…  I like watching cooking shows. Surprised? Bet not.  Sometimes, they run in the background while I’m online. Sometimes they capture my attention and I am all eyes and ears.  This happened recently when watching America’s Test Kitchen on PBS. I  could just taste their version of Latin Style Chicken and Rice (Arroz con Pollo) while they were preparing it, and that’s how it arrived on last night’s dinner table.

So here is my results of preparing America’s Test Kitchen’s recipe. Some modifications (naturally, I am my father’s daughter after all…) Let me know if you want to know how I changed it up.  What cooking shows made an impact on you?

The Galloping Gourmet — Really?
The quirky cooking show habit started a long time ago when The Galloping Gourmet aired on a local channel. Graham Kerr just cracked me up while I began taking notice of preparation, ingredients and such.  But mostly, this fellow had panache, verve and he cooked! The entertainment value was huge. Kerr was just having too much fun cooking and relating to his audience.  That glass of wine at the end made me feel as if I was a guest at his table.

Long after I was married,  I distinctly remember my Dad going on and on about this new cook from Louisiana, named Emeril. He told me, “Robi, you should see this guy…. BAM!” What an impact it made on the both of us. The show gave us great opportunities to talk about food, prep and ingredients, a common bond that we could share. Great conversations.

Influence warmly regarded.
My Dad wasn’t much inclined to have you cook along side with him, far from it. More a solo act — that’s for sure. So our chats about what he was thinking of, how he was going to make a dish “his way” became so rich and textured.  With personality and charm his eyes would light up, laugh lines crinkling as he talked.  His enthusiasm easily matched an Emeril or Graham. He even started to subscribe to foodie magazines and sharing them with me. A favorite was Food and Wine (Gourmet was too, too stuffy and pretentious for his taste.) We both got excited when Williams Sonoma catalog arrived. Like some folk think of the Victoria’s Secret catalog, we’d turn the down the page corners of those special goodies that caught our eye. To the day he passed, he was thinking about his next “good fix.” I have decades to catch up to him.

Chips,  salsa and a chat anyone? 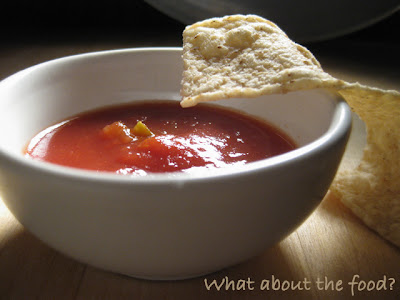 2 Responses to Arroz con pollo and memories of cooking shows