It is my last day in Tunis, the capital of Tunisia. Smallest country in northern Africa. Tunisia sits on the coast of the Mediterreanian with influences of the Ottoman, Christians, Arabs and French. I have done my sight seeing. Visited the Unesco World Heritage sites, the Mediana with the narrow streets that create cooling shade from the African sun, the Zaytouna Mosque and the different medina markets (souqs) which are  organized into different commercial areas. Today is mine as I return to the Central Market.

It is nearly September and the morning temperatures are a comfortable 73 degrees as I slip on my gauze skirt and top, knowing that the heat will climb into the nineties before the day is done.  Grabbing my market bag, camera and purse I walk through the hotel’s iron gates and heading down the few blocks of the Avenue de France and toward Rue Charles de Gualle. Finally turning on to Avenue de Paris. The sun is bright against the white stucco walls and the wailing traffic. But today is mine as I am determined to bring home the taste of Tunisa. The peppers, harissa and spice that epitomizes the cuisine of this North African country.

The covered market looms large in front of me as I enter the arched pathway.  A market that dates from the nineteenth century, colorful, resplendant with an incredible selection of cheeses, fresh bread, spices–especially peppers and harissa, olives and pickles.  The space is abuzz with merchants selling fresh produce, fish and wares while locals make their daily purchases. An old market that dates back in history, this was named Fondouk El Ghalla, the Central Market, known as the largest food and vegetable market in Tunisia. Not only am I shopping for spices. I know I will want a last chance to savour the market foods, kebabs, and scented waters with dark rose or blossom petals, so similar to agua fresca with flowers. Leaving room for a dessert of my favorite Baklawa, layers of thin pastry interspersed with ground pine nuts, almonds, hazelnuts and pistachios.

Perhaps I will have time to visit the Souz el-Berka to find a gold bangle as a treasure from my visit. From a dark past this market specializes in the goldsmiths trade. We shall see what can be found and negotiated.

After a day at the market, rest and quiet back at the hotel. The fan spinning rhythmlically as it cools. A leisurely nap and lie-in before my darling one and I head to the marina. One last grilled fish, sunset, and a toast to Northern Africa.

Or so I would have imagined.

A celebration of adventure in far-a-way places, foreign cuisines and cultures. A musing until made real. A part of Street Foods Monthly Mingle. 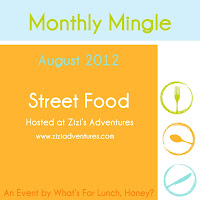 Monthly Mingle is a virtual potluck since 2006 created by Meeta K. Wolff, What’s for Lunch Honey.

Street Food is the 2012 August theme from Zizi’s Adventures.

And, as luck would have it, my friend Jeanne at cooksister.com is having a Braai (South Aftrican Grilling over hot coals) contest and this is my entry. See Braai, the Beloved Country for all the information.